Composer and presenter Eímear Noone hosts an online panel discussion with the composers behind BAFTA-nominated games Deathloop (Tom Salta), Psychonauts 2 (Peter McConnell), and Far Cry 6 (Pedro Bromfman). In this online masterclass, they will share their experiences and insights of working on a BAFTA-nominated soundtrack. The session will end with a virtual audience Q&A. 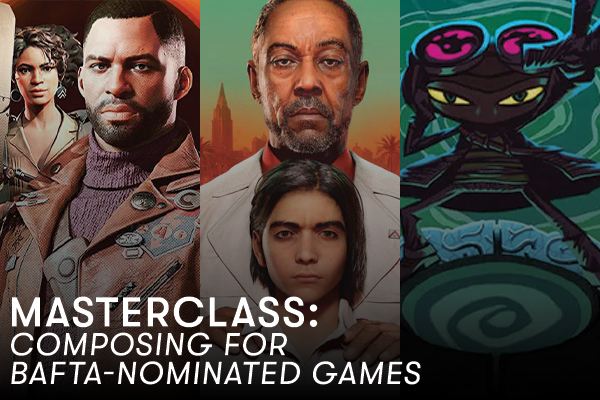 Each game provided a unique challenge for the composers.

Psychonauts 2 called for a diverse yet cohesive soundtrack, reflecting the gameplay in which players help various characters with their individual trauma by entering their mottled ‘mindscapes’.

Deathloop, a game built on a repeating time loop with a 20-hour story, needed a soundtrack that had a recognisable motif without falling into monotony and repetition for players.

Meanwhile, developing an authentic soundtrack for a game set in a fictional Caribbean island in the throes of revolution was crucial for Far Cry 6.

Learn what went into the making of each soundtrack, from the creative decisions to how the themes, settings and even gameplay mechanics influenced the creation of the BAFTA Games Best Music nominations.

Eímear Noone is a LA/Dublin based conductor and award-winning Irish composer, composing extensively for film and videogame. Eímear is responsible for some of the most enduring soundscapes on World of Warcraft and other best-selling video games. Alongside composing, Eímear conducts orchestras worldwide – notably in 2020, Eímear made history by becoming the first female conductor to perform at the 92nd Academy Award’s ceremony. She is also the presenter for Classic FM’s games music show High Score.

Born and raised in Rio de Janeiro, Pedro Bromfman has been writing, playing and producing ‘Music For Images’ for nearly twenty years. His music has accompanied a prolific stream of stories in both home theaters and multiplexes. Over three seasons Bromfman has defined the musical character of Netflix's Narcos, composed scores for the hit reboot of RoboCop, Latin-American blockbusters such as the Elite Squad film series, Nat Geo’s docuseries' Chain Of Command, The Story of Us with Morgan Freeman among many other features including The Panama Papers, Thumper and Deep Web. In the video game world Bromfman has worked on scores for Max Payne 3, EA’s Need For Speed: Heat and Ubisoft’s Far Cry 6.

ASCAP award-winning and BAFTA nominated composer Tom Salta is one of the most versatile and prolific music artists/producers working in film, television, advertising, and video games. Salta has received widespread industry acclaim for his world-class produced hybrid scores featured in film, television and video games including the award winning Arkane Studios’ game, Deathloop.

Peter McConnell has composed award-winning scores over three decades for a diverse range of video games including Hearthstone, the Sly Cooper series, Plants vs. Zombies 2 and classic LucasArts titles such as Full Throttle and Grim Fandango. His score for Psychonauts 2 was nominated for BAFTA, MASA and Game Audio Network Guild Awards and won a DICE Award for best musical score.